Tibetan diagram of the hollow earth?

As stated in Mysteries of the inner earth, part 4, section 2 (Shambhala and Agharta), the Tibetan diagram below, and the German and Russian versions of it, are among a large collection of documents that the Russian UFO Research Station (RUFORS) received from an anonymous source in 2008/2009. The material is full of wild and outlandish claims, and has attracted little interest outside conspiracist circles; most, if not all, of the documents are generally assumed to be forgeries.

The Tibetan diagram was allegedly obtained during a German expedition to Tibet in the 1930s. It was then translated into German, and both diagrams were later shared with a Soviet official named Savel’ev, who visited Germany in 1938. The two diagrams, together with two Russian versions, were appended to a report that was submitted to the Soviet authorities on 10 January 1939. Within days, a decision was supposedly made to organize a new Soviet expedition to Tibet under Savel’ev’s leadership (ancientscienceartifacts.org).

It’s not clear exactly when the Tibetan diagram is supposed to have been obtained. The documents imply that it was acquired during Ernst Schäfer’s five-man expedition to Tibet in the late 1930s, which was backed by the SS and the Ahnenerbe (a Nazi institute for studying the history of the Aryan race). However, that is impossible because the expedition lasted from April 1938 to August 1939 and the team didn’t reach Lhasa until 19 January 1939 – nine days after Savel’ev allegedly submitted his report. Schäfer, a zoologist, made two earlier expeditions, in 1931-32 (to Western China and Eastern Tibet) and in 1934-36 (to Eastern Tibet and China), but these expeditions were organized by the American Brooke Dolan II, and they did not visit Lhasa (info-buddhism.com).

At the top of the German diagram is the full name of the Ahnenerbe institute: Studiengesellschaft für Geistesurgeschichte, Deutsches Ahnenerbe (Study Society for Ancient Intellectual History, German Ancestral Heritage). This organization was founded in July 1935 and changed its name in 1937 to Forschungs- und Lehrgemeinschaft das Ahnenerbe (Ancestral Heritage Research and Teaching Community). Oddly, the Russian diagrams are dated ‘1939, Tibet, Lhasa’.

According to the ‘secret’ documents, the Nazis’ interest in Tibet was partly inspired by the results of an alleged Soviet expedition to Tibet in September 1925 led by Yakov Blumkin, a rather unsavoury Soviet agent. The 13th Dalai Lama is said to have received him in Lhasa in January 1926. After promising to provide military equipment and a loan, Blumkin was taken to subterranean chambers beneath the Potala Palace and shown, among other things, some ‘gigantic forceps’, over 10,000 years old, which when heated to an extremely high temperature, could turn gold into a powder that the rulers ate to extend their lives by hundreds of years (ancientscienceartifacts.org)! The Soviet authorities executed Blumkin in 1929 because he had visited Leon Trotsky in exile. According to one of the documents, however, he was executed because he had divulged information obtained in Tibet to the Germans. 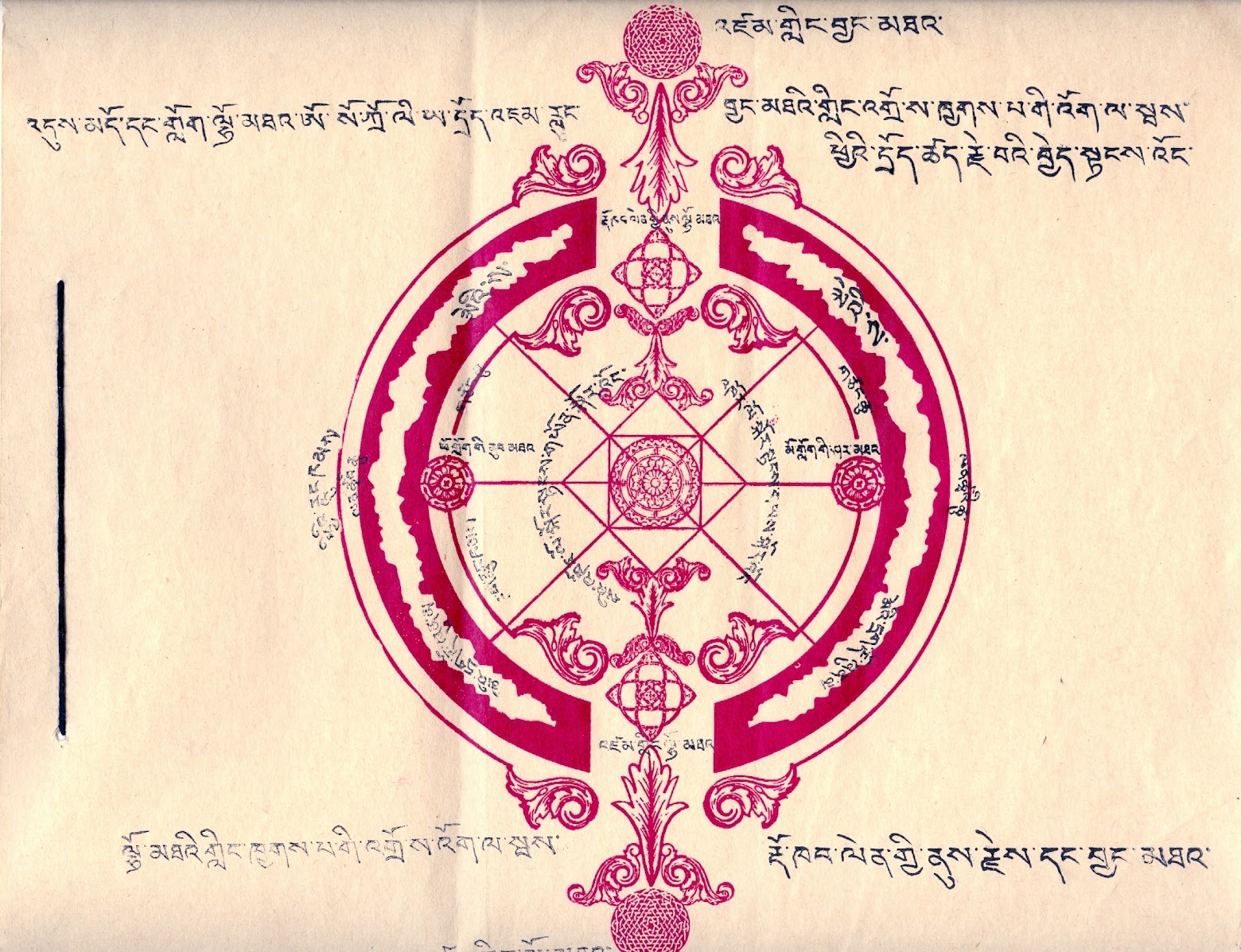 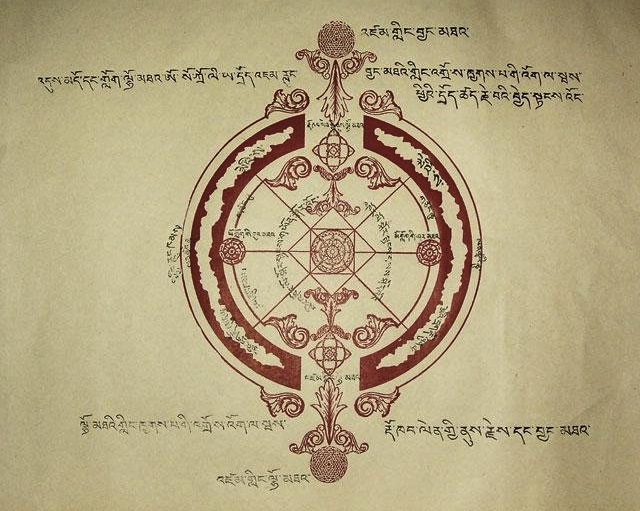 
The black-and-white version of the German diagram is said to have been in circulation longer than the colour version. It differs from the colour version in several respects: some of the captions are at a different level in relation to the drawing; two sentences are missing (about the polar passages being hidden by ice); the drawing is the opposite way up in relation to the text; and the top right corner shows signs of ageing. 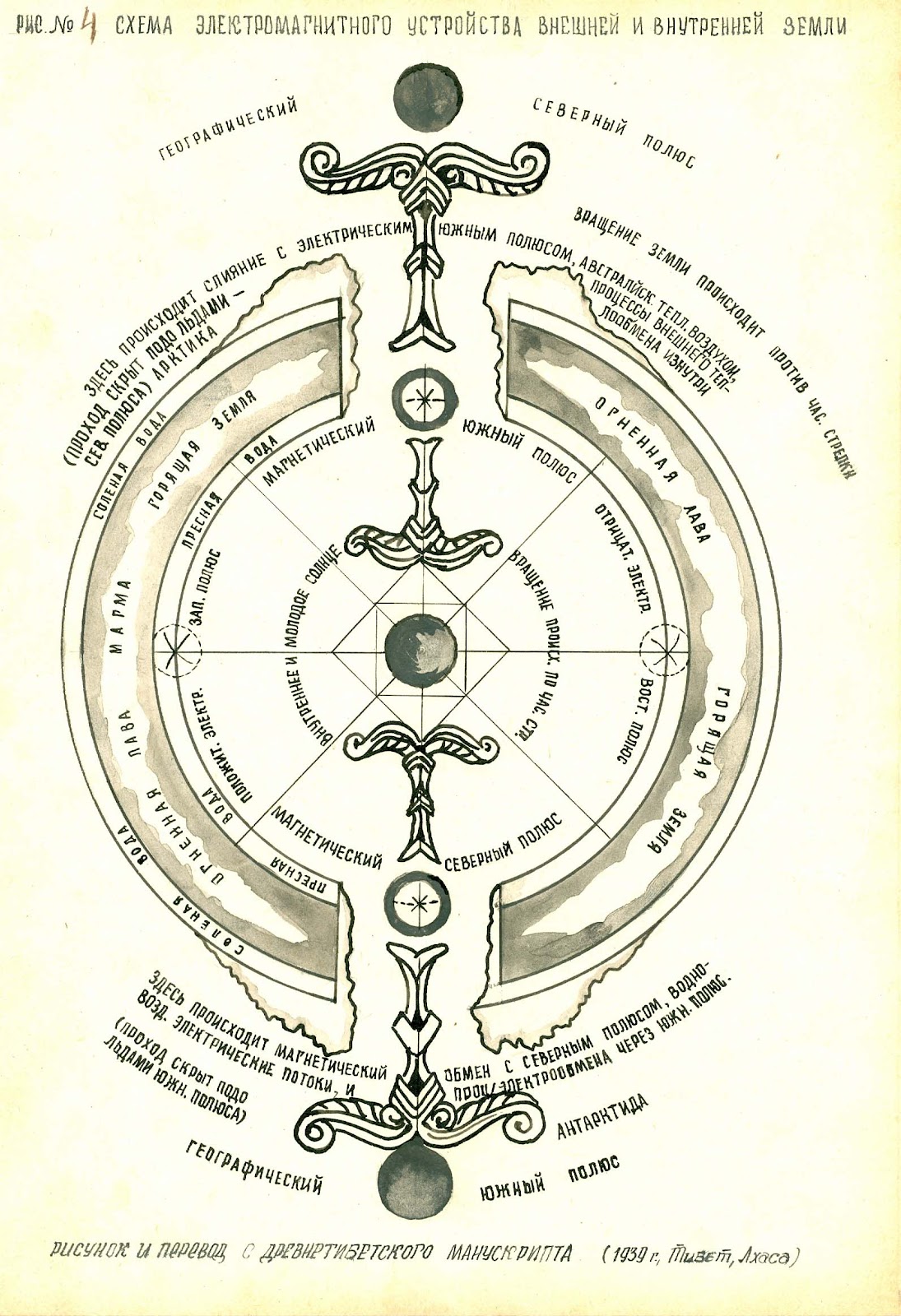 The table below gives the translation of the Tibetan, German and Russian captions. The Tibetan has been transliterated and translated by David Reigle, who writes:

It is obviously written in comparatively recent Tibetan. For example, it gives what is apparently the name Australia in Tibetan transliteration: o so kro li ya. It also refers to positive electricity, pho glog, and negative electricity, mo glog. In older writings, glog means lightning. ...

The text on this diagram is obviously a blockprint. It is not handwritten. You can tell because it is slightly off center in relation to the red picture background, and it is dark like it should be in some places and too light in other places. This means that enough copies of this diagram were needed to warrant the carving of a woodblock from which to print them. (email, 25/03/16)

The table gives the translation of the individual Tibetan words (the numbering of the captions refers to the numbers in the diagram below the table). How the words hang together in the longer phrases (especially 2, 4, and 10) is somewhat unclear; they read more like cryptic notes. The captions could not have been written by simply looking up words in a dictionary; a good command of Tibetan was required. 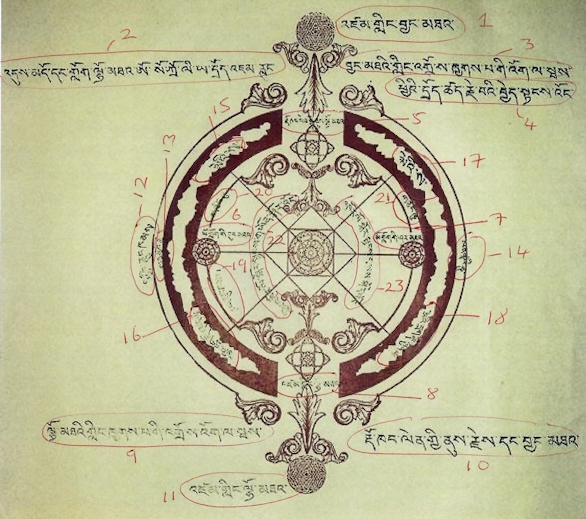 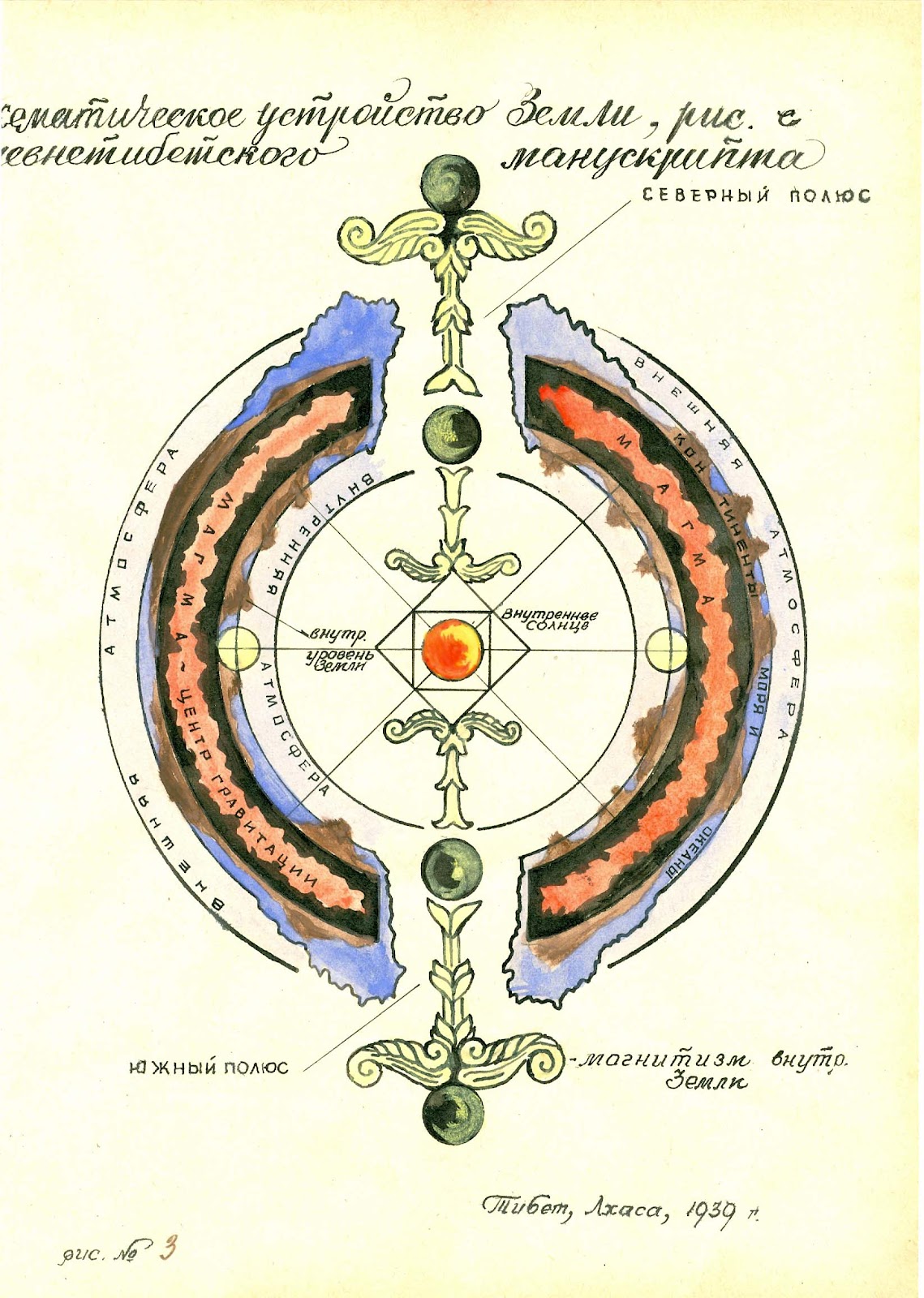 The Tibetan diagram is of dubious provenance and it is impossible to confirm its authenticity. It is also impossible to say for certain whether the German/Russian captions are based on the Tibetan captions, or vice versa. The captions in the different versions are similar but not exact matches. Unlike the Tibetan and Russian versions, the German diagram does not mention the direction of rotation of the outer and inner globes. Nor does the German version label the outer and inner atmospheres, whereas the Tibetan diagram and second Russian diagram do. Only the Russian diagrams call the inner globe an ‘inner sun’. 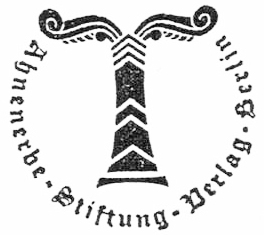 The Tibetan diagram is clearly the most ornate. David Reigle points out that it is not a standard Buddhist mandala. The individual elements look like artistic flourishes and are unlike the things normally seen in mandalas. Mandalas usually have no openings at any of the four cardinal directions, and if they do have openings, there are four. Nothing resembling the diagram appears in any known Buddhist texts.

The German and Russian diagrams are stylistically simpler and very much alike. They use a very similar symbol (four times) between the five circles along the earth’s axis. This symbol is virtually identical to that used by the Ahnenerbe publishing company (Ahnenerbe-Stiftung-Verlag) in Nazi Germany (atlasenigma.ru).

Unlike the Tibetan diagram, the Russian and German diagrams add an outline of the polar ice, which extends over the rim of the openings. All the three main diagrams say that the northern and southern polar ‘passages’ are covered by ice, but none of the diagrams actually shows this. Unless the northern polar passage begins underwater, it would have to exist on either known polar land at some distance from the pole, or on unknown polar land that is being kept hidden by either a massive government coverup or by occult power.

The captions on all the three main diagrams speak of an exchange of air currents via the south pole, and the German and Russian diagrams also refer to an exchange of water currents. The diagrams do indeed show a large opening through which this could take place, but the captions say the opening is blocked by ice. The most peculiar caption is the one that speaks of ‘Australian warm air’; this most likely refers to air emerging from the southern opening, ‘from within outwards’, since australis means ‘southern’ in Latin. But why use the word ‘Australian’?

In any event, the polar regions are extremely cold and there is no evidence of warmer air emerging from the earth’s interior, despite what some hollow-earth proponents have claimed in the past. As noted above, there is a – probably older – version of the German diagram which omits the sentences about the passages being hidden by ice. And this makes more sense since the diagrams actually show huge openings. However, the existence of such large holes is untenable unless we invoke a vast, worldwide, government/military coverup. It could be argued that the polar openings were not originally intended to represent physical holes; theosophical literature speaks of a circulation of ethereal energies through the earth, mainly from the north pole to the south pole (Solar and terrestrial magnetism).

The diagrams place the south magnetic pole at the north end of the earth, and vice versa. This is in line with modern science, which has long accepted that the magnetic pole near the north geographic pole has south magnetic polarity, otherwise the north pole of a compass would not be attracted by it (Theosophy and magnetism). The north and south magnetic poles are the points at which magnetic force lines converge or diverge. And the north and south geographic poles are the two ends of the earth’s spin axis. But the concept of western (positive) and eastern (negative) ‘electric poles’ – which all the diagrams refer to – seems completely meaningless. These two ‘electric poles’ of the rotating globe would actually form a complete circle.

There are three possibilities: either the Tibetan diagram in its entirety is a clever forgery; or it originally had no captions, and was later given – rightly or wrongly – a hollow-earth interpretation; or it is entirely authentic but contains several ‘blinds’.

Mysteries of the inner earth

Theosophy and the hollow earth