‘There is No Religion Higher than Truth’

We live in a questioning and critical age when the religious and scientific dogmas of the past are increasingly being challenged. The idea, for example, of a personal, anthropomorphic God, a sort of magnified image of ourselves, a God who created the universe and ourselves from nothing, who listens to prayers, grants favours, forgives sins, and eventually consigns us to heaven or hell – such a God finds fewer and fewer believers. At the same time, the idea of a soulless, mechanical universe governed by nothing but chance is not very compelling either. Many people are seeking a deeper and more meaningful vision of life.

This was also true of the Russian mystic Helena Petrovna Blavatsky, the ‘mother of the New Age’, when she set out on her quest for knowledge in the middle of the 19th century. Through her contacts with religious and mystical traditions in many parts of the world, and the instructions she received from her own teachers in Tibet, she learned of the existence of the ageless wisdom – the fountain-source from which all the great world religions and philosophies have sprung. 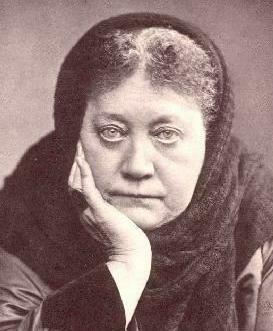 
The fundamental teaching of the ancient wisdom is the spiritual unity of all things. Blavatsky writes: ‘not only humanity – composed as it is of thousands of races – but everything that lives is made of the same essence and substance, is animated by the same spirit, and consequently, everything in nature is bound in solidarity.’ Rejecting the idea of a God existing outside nature, theosophy speaks of an all-pervading divine essence, an infinite ocean of consciousness, from which all things are born and to which they ultimately return. The human kingdom is one of the phases of experience that each god-spark must pass through during its long evolutionary journey through the worlds of matter.

The idea that each human soul lives just one short life on earth, and then spends the rest of eternity in heaven or hell is neither logical nor appealing. According to the ageless wisdom, we incarnate on earth many many times, and in each life we reap the consequences of the causes we have set in motion in previous lives, in accordance with the law of karma. In this way we gradually learn from our mistakes and unfold more and more of our spiritual potential. The twin doctrines of reincarnation and karma place the responsibility for our lives firmly upon our own shoulders. Instead of being the victims of chance and ‘selfish genes’ on the one hand, or of fate and some fickle God on the other, we have made ourselves what we are, and it is up to us to use our free will wisely, in order to help others and change ourselves for the better. And just as the quality of our thoughts and deeds largely determines the nature of our dreams during sleep, so they will also determine the states of consciousness experienced by the inner self after death.

H.P. Blavatsky devoted her life to spreading these and other ideas. She believed that they would help to eradicate ignorance and superstition, uproot separateness and selfishness – the cause of so much suffering and misery – and lay a sound basis for universal brotherhood. In her work, she had to cross swords with both dogmatic theology and materialistic science, and it was this that lay at the root of much of the opposition she encountered. Her eventful life and the far-reaching influence she has had on modern thought are described in detail in the biography The Extraordinary Life and Influence of Helena Blavatsky; Founder of the Modern Theosophical Movement by Sylvia Cranston and Carey Williams, and also in H.P. Blavatsky and the Theosophical Movement by Charles J. Ryan.

The first of the three objectives of the Theosophical Society, founded by H.P. Blavatsky, H.S. Olcott and W.Q. Judge in 1875, is to form the nucleus of a universal brotherhood of humanity, without distinction of race, creed, sex, caste or colour. The basic moral precepts that would make universal brotherhood a reality are very simple, but it is a constant challenge to apply them consistently in our everyday lives: we should try to be loving and forgiving, calm and patient, kind and altruistic; we should treat others as we would like to be treated ourselves, and concentrate on correcting our own faults rather than on criticizing others; and above all, we should live to benefit others. Blavatsky’s work The Voice of the Silence is a beautiful expression of the ethics of brotherhood and self-sacrifice, in the tradition of Mahayana Buddhism. In it she writes: ‘Sow kindly acts and thou shalt reap their fruition. Inaction in a deed of mercy becomes an action in a deadly sin.’

The second objective of the Theosophical Society is the study of the world’s religions, philosophies and sciences. Blavatsky played a pioneering role in introducing the West to the sacred traditions of the East. She also provided insights into the deeper meaning of myth, allegory and symbolism. When stripped of their later dogmatic accretions, the world’s religions are found to have more similarities than differences: they recognize that our essential self is fundamentally identical with the Universal Self; they advocate the golden rule of universal love; and they speak of enlightened teachers – Krishna, Buddha, Christ, etc. – who have appeared on earth at different times and restated some of the fundamental spiritual values.

The third objective of the Theosophical Society is the study of the hidden mysteries of nature, including the psychic and spiritual powers latent in man. A growing number of scientific investigators are admitting that many phenomena in the physical world cannot be satisfactorily explained in terms of standard physical and chemical forces alone. The growth of an organism from a seed or egg, the existence of instinct and selfconsciousness, the purposeful nature of evolution, and a wide variety of paranormal phenomena all point to the operation of nonphysical forces and influences. In her book, Cranston outlines some of the latest insights and discoveries in various fields of science, including research into out-of-the-body experiences, near-death experiences and survival after death.

Materialistic scientists regard consciousness as a mere by-product of matter, and matter in turn is regarded as concentrated energy. Theosophy, on the other hand, says that consciousness is the ultimate reality, the highest form of energy, and physical matter is just one of its many manifestations. Hence the physical world is interpenetrated by innumerable other worlds, composed of grades of energy-substance invisible to our physical senses. And just as the physical world is organized and coordinated by inner worlds – astral, mental and spiritual – so our physical bodies are animated and controlled by our own inner nature – astral model-body, life-energy, thoughts and desires, and our more intuitive and spiritual qualities. And whether it is our higher nature or lower nature that holds sway is entirely up to us.

H.P. Blavatsky was not interested in establishing yet another sect with herself as high priestess. She made no claims to infallibility, but called for ‘free and fearless investigation’, believing that, as the motto of the Theosophical Society puts it: ‘There is no religion higher than truth.’ In her view, all ideas – whatever their source – should be tested against our own knowledge, experience and intuition. She strove to reawaken interest in the timeless, soul-strengthening ideas of the ancient wisdom, because she felt that they could help us to develop a healthy and positive philosophy of life, one which satisfies both the heart and the intellect, and which can help us to meet the trials and temptations of daily life. Her major works – Isis Unveiled, The Secret Doctrine, The Key to Theosophy and The Voice of the Silence – have been continuously in print since her death in 1891. And it is because her writings are so full of stimulating, thought-provoking and inspiring ideas, that they are likely to remain in demand for a very long time to come.