“What Will Be Penetrated by Drilling at the Base of the Oceanic Crust?” by Igor A. Rezanov, New Concepts in Global Tectonics Newsletter, 34, 34-39, March 2005

Following the devastating tsunami on Boxing Day 2004, there was a lot of talk about how the subduction of the Indian plate beneath Indonesia was the root cause of the earthquake that triggered the disaster. However, a significant number of earth scientists dispute the existence of subduction and question the classical plate-tectonic model of which it forms part (see Meyerhoff et al., 1996; Pratt, 2000, 2001; Smoot, 2001; Smoot et al., 2001a,b; Storetvedt, 1997).

Dong Choi’s battle with the plate-tectonic establishment came to a head in the late 1980s, when he was working for the Australian Bureau of Mineral Resources (now Geoscience Australia). He prepared a manuscript presenting evidence that Precambrian continental crust was present under the northwestern Pacific, and that a paleoland had existed there in the Paleozoic to Mesozoic. He based this conclusion on dredging and deep-sea drilling data, seismic profiles, paleogeography, and the geology of the Japanese Islands. However, the Chief of his Division told him that if he published the paper, he would have “no room to stay with us,” while the Chief Scientist accused him of doing “bad science” and reminded him that he was on contract. Choi published his article in the Journal of Petroleum Geology (Choi, 1987), and quit the organization soon afterwards (personal communication, May 2005). An editorial comment described the article as “quite revolutionary ... almost certainly the precursor of the future in seismic exploration and tectonic interpretation.”

Wadati-Benioff zones – inclined zones of earthquake foci located mainly around the Pacific Rim, adjacent to deep-sea trenches – were discovered in the first half of the 20th century. With the rise of plate tectonics in the 1960s and ’70s they were labeled “convergent plate boundaries” or “subduction zones,” where moving lithospheric plates, supposedly generated by upwelling magma at midocean ridges, plunge back into the mantle. Many geoscientists have pointed out that Wadati-Benioff zones have a highly variable and complex structure, with transverse and vertical discontinuities and segmentation, and bear little resemblance to the highly stylized pictures of continuous downgoing slabs depicted in geological textbooks (Figure 1). 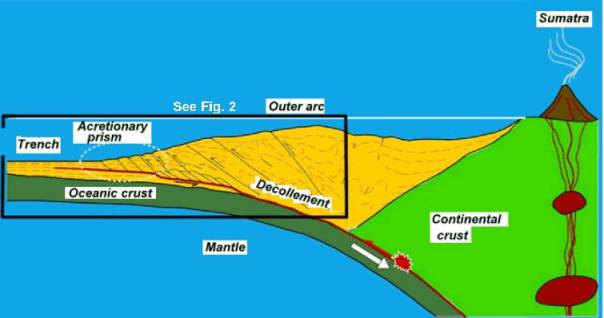 Choi argues that plate-tectonic interpretations of seismic profiles across deep-sea trenches lack geological integrity and are clearly model-driven. In the March 2005 issue of the New Concepts in Global Tectonics Newsletter, he presents his interpretation of a seismic profile across the Java Trench (Figure 2). The basement units (I and II) show vertical block movement, and are covered by a relatively undisturbed sedimentary layer (Unit III). Northwestward (present-day landward) sediment progradation is especially conspicuous throughout the overlying units (IV to VI), implying the presence of exposed land in the present deep ocean region when these units were deposited. Unit VII was deposited after the present oceanic region started to subside.

Thrust faults are seen in the lower slope affecting Units III to VII, and are usually attributed to plate subduction. However, since there are no compressional tectonic features in the underlying units, Choi thinks that they are better interpreted as the result of sediment overloading in the middle to upper slope. He argues that the block-faulted units (I and II), which indicate a predominantly tensional stress regime, and the well-layered, little-disturbed Unit III, are unequivocal evidence against plate subduction.

Fig. 2. Choi’s interpretation of a seismic profile across the Java Trench.

Due to the lack of drilling information from the area, it is impossible to assign definite ages to the acoustic units. However, the striking similarity between the Java Trench acoustic stratigraphy and that of Pacific Ocean margins suggests that Units I and II correspond to the Precambrian, Unit III to the Paleozoic, Units IV and V to the Paleozoic–Mesozoic, Unit VI to the Mesozoic–Paleogene, and Unit VII to the Cenozoic (Choi, 2000; Smoot and Choi, 2003). Given that plate tectonics insists that the ocean floor can be no older than Mesozoic, this interpretation is sheer heresy.

Choi argues that plate subduction below Indonesia also is contradicted by the following facts:

The seismotomographic image (Figure 3) shows that the “descending plate” or “cold slab” (with faster seismic velocities) is missing under the Java Trench and the Indonesian arc. A higher-velocity feature only starts to appear below 400 km, but takes a subvertical attitude, clearly in conformity with the deep-seated SWJ tectonic zone. Furthermore, the supposed subducted slab becomes subhorizontal below 700 km, and is separated into several layers. “This tomographic image alone,” says Choi, “is enough to bury the subduction models.” 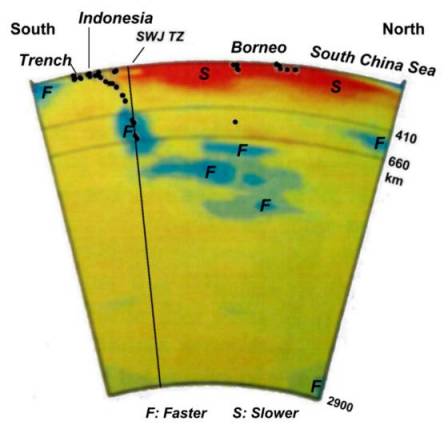 Seismotomographic images of other Wadati-Benioff zones show blobby, bent, or wavy high-velocity zones, often discontinuous, with vertical zones aligned with deep fractures, and horizontal zones below about 500 km (Choi, 2004). A great deal of special pleading is required to reconcile these images with the subduction model. The connection between faster mantle zones and deep fractures (which plate tectonicists have consistently overlooked) suggests that the faster zones have lost volatiles and liquids through the fractures, and that the higher velocities reflect the degree of chemical depletion rather than thermal variations.

Seafloor spreading and subduction also are contradicted by the fact that several major lineament systems or tectonic trends, dating back to the Precambrian, run across ocean floors and into adjacent continents – something that is incompatible with large-scale horizontal plate movements. For instance, the Investigator fracture zone in the Indian Ocean connects to a N-S structural high in Indonesia and Malaysia.

As regards the Boxing Day disaster, Choi notes that the precursor, the main shock, and a major seafloor landslide are all aligned along a major NE-SW fracture system. Upward seismic energy migration and crustal movement along fracture zones appear to be the major cause of the Boxing Day earthquake and the accompanying tsunami. The unusual level of stress accumulation in the Indonesian arc may be due to the very active vertical movement in this region in recent times, as indicated by raised or buried modern coral reefs.

Choi points out that Claude Blot’s little-studied seismic-energy transmigration concept, which links precursors and main shocks, is so far the only scientifically tested and proven method of earthquake prediction (Blot et al., 2003). It fits in with the proposal that the upduction of mantle material is responsible for tectonic phenomena in trenches, arcs and backarc zones – a view confirmed by the direction of displacement of the earth’s rotation axis following the Boxing Day quake and other major earthquakes (Scalera, 2005).

An alternative interpretation of Wadati-Benioff zones is therefore that they are primarily thrust/reverse faults. They represent the deformation interface between the subsiding ocean crust and mantle and the sometimes uplifting island arc/continental region, and provide conduits for the release of mantle fluids and seismic and thermal energy. They may have originated as cooling cracks in Precambrian time, but were rejuvenated and assumed their present configuration after deep oceans began to form in the Mesozoic. Deep-sea drilling has revealed that the Pacific Ocean subsided by an average of 4 km during Mesozoic–Cenozoic time. It is also noteworthy that rapid subsidence of the Pacific trenches in the Plio-Pleistocene has gone hand in hand with the rapid uplift of neighboring mountain ranges.

In another article in the same issue of the New Concepts in Global Tectonics Newsletter, Igor Rezanov reports that the construction of a new drillship capable of penetrating the entire ocean crust and the top of the mantle is nearing completion in Japan. Science, he says, will then get the final answer as to whether the plate-tectonic model is correct.

The first layer of the ocean crust consists of unconsolidated marine sediment, the second consists mainly of basalt plus lithified sediment, and the third (lowest) layer is predicted to consist of gabbro underlain by serpentinites. Harry Hess, one of the founding fathers of plate tectonics, hypothesized that layer 3 was composed of serpentinites formed by hydration of mantle ultramafics (peridotites) rising along the axes of midocean ridges.

Rezanov challenges this hypothesis, and proposes that the third layer of the ocean crust consists of Precambrian metamorphic rocks altered by granitization, pierced by Mesozoic–Cenozoic basalt dikes and sills. Isotopic and rare-element geochemistry of oceanic basalts suggests that they passed through a granite-gneiss layer similar in composition to the continental granite-gneiss layer. Rezanov contends that the serpentinites dredged from the ocean floor belong not to layer 3 but to the lower layer of the former continental crust, which was transformed (“basified”) by widespread basalt intrusions and sank during the Mesozoic–Cenozoic, whereas the upper layer of the continental crust became the third layer of the oceanic crust.

There is certainly every reason to think that major upsets may be in store regarding the composition of the ocean crust. Although geological textbooks repeat like a mantra that no rocks more than 200 million years old have ever been found in the oceans, the truth is that literally thousands of rocks of Paleozoic and Precambrian age have been found there, including many continental-type rocks. Plate tectonicists have no choice but to explain all these finds away (e.g., as rocks dropped by icebergs, or as fragments of crustal blocks that somehow got left behind during seafloor spreading). Proponents of earth expansion tend to agree with plate tectonicists on the young age of the seafloor, and they too downplay or ignore evidence contradicting this assumption.

Rezanov gives several examples of anomalous rock finds. As far back as the 19th century, granitoid xenoliths were discovered in basalts from Ascension Island in the Atlantic Ocean and gneiss inclusions were discovered in basalts and trachytes from Tristan da Cunha Island. During the 70th cruise of the Glomar Challenger in the eastern Atlantic Ocean, a well drilled in 3700 m of seawater penetrated pelagic sediments, Mesozoic continental salt-bearing deposits, and bottomed in granite-gneiss basement. The scientists involved concluded that the ocean basin formed as a result of the basement of the African craton sinking to a depth of 4000 m.

Seafloor dredging in the East Pacific Basin near the Clarion and Clipperton fractures turned up granite-metamorphic rocks and Cretaceous volcanic-sedimentary rocks typical of continental crust. Granulites attributed to layer 3 were discovered in wells 921 to 923 on the Mid-Atlantic Ridge, on the Carlsberg (Arabian-Indian) Ridge (in 6400 m of seawater), in a fracture zone on the Ninetyeast Ridge (in ~5000 m of seawater), and in the Eltanin fracture zone on the southern East Pacific Rise. All these locations lie outside the drift-ice limit.

In summary, plate tectonics predicts that penetration of the ocean crust down to the Moho and deeper will uncover serpentinites beneath basalts and gabbros, and that the rocks will be no more than 200 million years old. Within a few years, this hypothesis will be put to the ultimate test.

Scalera, G. (2005). The geodynamic significance of the earth axis displacement during the Sumatra earthquake. New Concepts in Global Tectonics Newsletter, 34, 32-34.

Plate tectonics: a paradigm under threat