[Several years ago one of the students at Point Loma who was giving a course in ‘The Mystery-Centers,’ asked Dr. de Purucker to trace for her the true passage of the postulant through the chambers of the Great Pyramid of Cheops.
The following is Dr. de Purucker’s reply. With the exception of the first two paragraphs, the answer is not verbatim, but represents a report written down immediately after the interview. It is here reproduced, however, as it stands, as bearing the sum and substance of G. de P.’s teaching in this regard. – Eds.]

One should not think of a human soul as having been caught in the pyramid and wandering around like an astral shadow in its interior. The initiant was conducted along certain pathways, or left alone at certain times, and the pathways or channels he followed, and the rooms in which he found himself, etc., were representations to his imagination or his mind in this form of what the inner man actually went through when disembodied.

One of the main purposes of the pyramid-initiation was to have the neophyte traverse the passages under the guidance of his teacher or teachers, and thus greatly to stamp upon the mind before being entranced, symbolically what the soul was to pass through in actuality in the inner worlds.

The postulant or disciple or chela enters along the descending passage with his guide, following along the fairly smooth passage which is not very light, until he begins to descend beneath the surface of the Pyramid, down into the Underworld as it were. Then he comes to a junction-point where the guide leaves him alone. Without help the chela enters into the ‘Ordeal of Matter’ of the Pit, and sheds his body, all the material elements of his nature. In this Pit, which is purposely made rough and unfinished to symbolize the rough and unshapely character of matter, the disciple must throw off all veils of matter and clamber out himsef, being careful not to fall into nothingness below.

As he comes out from the darkness, at the junction-point previously mentioned he is again met by his guide who either accompanies him, or points the way along another passage leading upwards. This passage gradually becomes more light, and is very smooth. Then the chela enters the Well of Deep Waters, which one may perhaps think of as the astral worlds. Alone the neophyte must now climb the ‘Ladder of the Soul,’ which again is rough and difficult of ascent. Finally, reaching the summit of this ladder, the soul enters the Fields of Aahlu, and comes into the Chamber of the Moon, the Queen’s Chamber, the chamber of lunar influences. 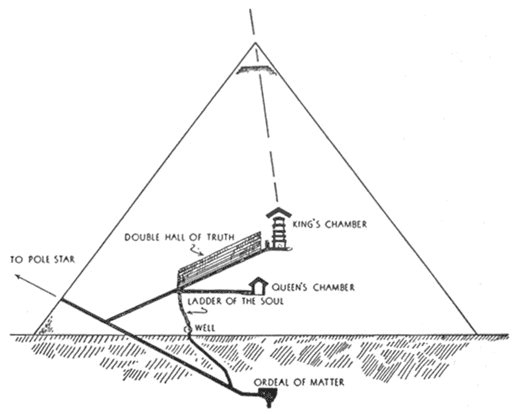 Resting there after appropriate ceremonies, the neophyte retraces his steps along the corridor of Aahlu and stands poised as it were at the landing place, at the gate to the Grand Gallery, the Double Hall of Truth. This Hall is a grandly majestic gallery, with seven sections, and the neophyte boldly ascends until he comes to the Antechamber of the King’s Chamber. Before entering the antechamber, however, the neophyte has a great step of nearly three feet to climb, then he must stoop very low, and – if the portcullis is up – he may pass through, stooping again very low, and finally, if his karman is good, he may proceed into the King’s Chamber, the Home of the Hidden God, and enter the coffer of Osiris.

Now begins the real Initiation when the neophyte’s body lies entranced in the coffer of Osiris. That which has been followed is actually a symbolic descriptive manner of suggesting what actually takes place in the inner worlds.

In the King’s Chamber there are the six large sections, the lower one representing our Earth, and the other five, the five planets, Jupiter, Mars, Saturn, Mercury, and Venus, while the Queen’s Chamber may represent the Moon.

The soul may ascend the planetary spheres, and then this Giant Triangle is really a ‘Ring-Pass-Not,’ something which stands as the bar to further passing, but possibly if the candidate is completely freed of all earthly and planetary attributes, the spirit may wing its way through the apex of this triangle along the mystic line through the topmost peak of the Pyramid itself – and then out and beyond – at one with Divinity.

Then the descent, down from the apex of the pyramid, through the mystic line of power to the apex of the King’s Chamber, down into the coffer and the soul is reunited with the entranced body. The Initiation is complete, the neophyte arises as it were from the tomb of trial, no longer a chela, but a Master, and in a daze, suffused still with the divine splendor, passes through the Grand Gallery, through the Hall of Darkness, and then ascends towards the Entrance. Now beautiful beyond description is his first sight – or was when this was supposed to have been built – for there in direct line of vision was the Pole Star, that star which in reality is the pivot of spiritual and divine things.