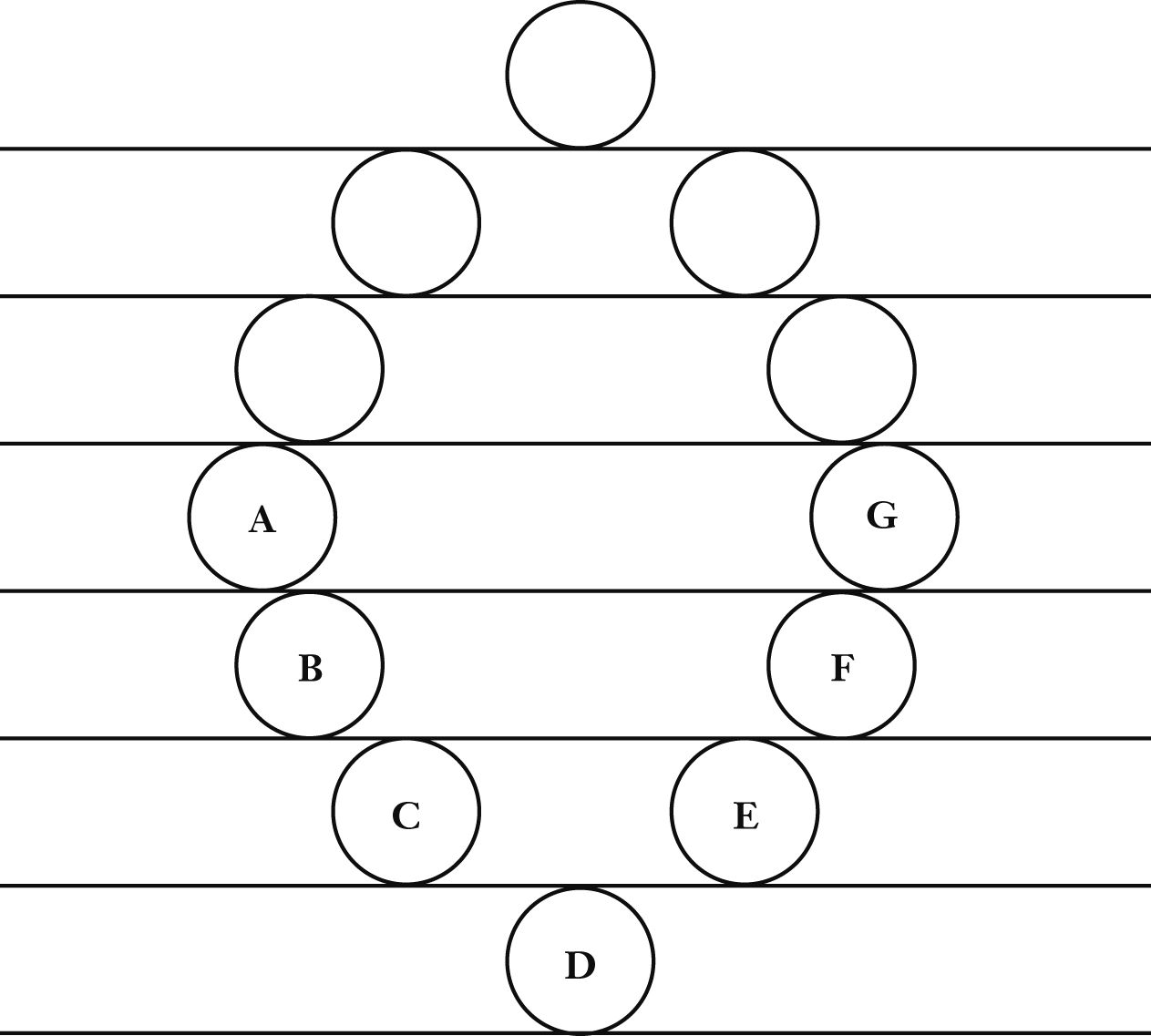 Schematic representation of the 12 globes of a planetary chain.

During a major inner round, the 10 life-waves – the three elemental kingdoms, the mineral, vegetable, animal and human kingdoms, and the three dhyani-chohanic kingdoms – move from globe to globe of a planetary chain in serial order; this involves a transfer of entities, of consciousness-substance, from plane to plane. On each globe the life-waves pass through seven (or 12) main stages of development (known as root-races in the human kingdom). Between two successive globe rounds, there is an interglobal rest period, equal to one-tenth of the time spent on the globe just left, and between one planetary round and the next the monads enter an inter-round nirvana. It is our higher human monad, or chain monad, which undertakes the inner rounds; on each globe it emanates a globe monad, or lower human monad, which clothes itself in the appropriate life-atoms furnished by the globe concerned.

In the first round the life-waves cooperate to lay the foundations of the globes, starting with globe A (in the sevenfold scheme). The influx of life-energies reawakens the dormant matter on the planes where the globes are to manifest, and as they develop they gather up the life-atoms that previously formed part of them, which have been transmigrating into and out of other beings during the long period of pralayic rest. The blueprint is provided by the dhyani-chohanic kingdoms (the architects), while the work of building the embryonic globes is performed by the lower kingdoms.

The first life-wave, reaching the laya-centre that will become globe A, contains within itself all the other life-waves, which are subsequently unfolded from it. When the first elemental kingdom has completed its sevenfold development on globe A, it leaves behind its most advanced representatives, or shishtas (‘remainders’), in a dormant state, while its ‘surplus of life’ is drawn to the next globe – meaning all the element-principles that belong to the other globes and cannot manifest on globe A. The second elemental kingdom then begins its work on globe A. When the first elemental kingdom completes its development on globe B, it leaves its shishtas on B and projects its surplus of life to globe C, while the second elemental kingdom leaves its shishtas on A and moves to globe B, and the third elemental kingdom begins its evolution on globe A. This pattern continues for all the 10 kingdoms. From the second round onwards, the life-waves – now more clearly differentiated – reawaken their respective shishta vehicles on the globes already formed and continue their evolution.

During the first round every class of monads must pass through all the lower kingdoms. In subsequent rounds, the higher monadic classes pass through the lower kingdoms more swiftly. Similarly, the reincarnating ego that enlivens a growing embryo recapitulates its past evolutionary history by passing through all the phases of gestation in the womb in order to build up a human body in which it can work.

Monads from all the life-waves are represented on all the globes, but in different numbers and in varying degrees of activity or rest. The human life-wave is currently the dominant active kingdom on globe D, but there are also human forerunners and stragglers on other globes. Our globe is composed mainly of aggregated mineral shishtas, most of the plants are shishtas, and 50% of the animals are shishtas. The animal kingdom is the dominant life-wave on globe E, while the lowest class of dhyani-chohans is the dominant life-wave on globe C and is just beginning its first round. When the bulk of the human kingdom leaves globe D, the globe will experience a period of dormancy or obscuration, which will end when the dhyani-chohans now on globe C end their interglobal rest and enter globe D (Dialogues 2:359 / 732-3). At the end of the fourth round, all the kingdoms will gather on the topmost globe for their inter-round nirvana before the fifth round begins.

In addition to the long periods spent on the various globes of the earth chain during the major inner round, our monads also visit the other globes after death, during sleep and during initiations, but for much shorter periods. The death of the physical body is followed by a second death in the kama-loka, where our lower astral nature is cast off. The reincarnating ego is withdrawn into its parent monad and sinks into its blissful devachanic sleep. The chain monad passes through the globes of the ascending arc, pausing in each one to shed the life-atoms native to that sphere. It projects a portion of its consciousness which briefly embodies in an appropriate vehicle, but the human monad as a whole is virtually unconscious of these experiences. An exception to this – in varying degrees – is formed by advanced fourth rounders, fifth and sixth rounders, and initiants. During initiations, the initiant’s inner self not only wings its way to the other globes of our planetary chain and gains first-hand experience there, but also visits the other planets and the sun.

The spiritual monad has a different reembodying monad, or chain monad, on each of the seven (or 12) planetary chains belonging to our family of sacred planets. At present our spiritual monads are especially bound to the earth chain since this is our current station on the outer rounds. During the postmortem outer rounds, we pass relatively quickly through the globes of these chains, but when during the major outer rounds our life-wave moves to another planetary chain, that planet will remain our station for a whole solar manvantara. During the outer rounds through the sacred planets, the order is: Jupiter, Venus, Earth, Mercury, Mars (Dialogues 1:21, 72 / 30-1, 82; see also Fountain-Source 141, 151); this list is not, however, complete.

During its postmortem journey, the spiritual monad, carrying the reembodying ego within it, follows the magnetic pathways known as the circulations of the cosmos, which correspond to the network of nerves, veins and arteries in the human physical body. As with the devachan, the length and nature of the postmortem outer round are determined by the moral, spiritual and intellectual quality of the last earth life.

During its postmortem passage through the planetary chains the monad frees itself of the life-atoms associated with each one. It strips off all the seven ‘coatings’ with which it had clothed itself during previous returns to incarnation on earth and finally enters the solar chain – its spiritual home. On its return journey to the earth chain the monad passes through the same planets in reverse order and in each one it picks up the life-atoms it had previously cast off.

The monad passes through the entire planetary chain of each of the sacred planets. On each globe it emanates a ray, a temporary psychomental soul, which briefly embodies in a suitable vehicle – spiritual, astral, ethereal or physical. This ray is ‘native’ to the planet on which it manifests, and passes through its various cyclic periods of activity, after which it is withdrawn into the monad. The higher principles associated with the monad proceed to the next planet along the circulations of the cosmos, impelled by karmic attraction. The same process is repeated on each of the sacred planets.

After visiting the solar chain, the spiritual monad turns back and retraces its steps because the attractions and aspirations which had previously caused it to rise through the spheres have now exhausted their energies, and the latent seeds of thought and feeling stored in the monad in previous earth lives, because of their origin in material spheres, now begin to pull the monad downwards. On reaching the earth chain, the higher human monad descends through globes A, B and C, staying briefly on each one to recollect the life-atoms which it had previously cast off during its ascent through globes E, F and G, and which have been pursuing their own journeyings in the intervening period. By the time globe D is reached, the reincarnating ego is nearing the end of its devachanic rest and begins to prepare for its next incarnation. It projects its ray into the karmically appropriate reproductive cells, which, once they have fused, grow into the body of the newborn child.

Theosophy paints a magnificent panorama of evolution. We are not worms of the dust, doomed to live a single meaningless life on earth, but children of the cosmos, sparks of divinity, on an eternal evolutionary adventure through the infinite fields of space and time.

See also: Rounds and manvantaras and The twelve sacred planets.